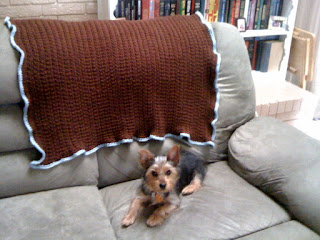 My daughter Desiree and grand-daughter, Jhordon had a request for tatted bookmarks. They wanted ones that they could put
in their bibles...Jhordon wanted the colors of a rainbow, with white on top. I thought that 'Tat-Man's' shuttle pattern looked most like a 'cloud'. (Thanks Mark). The other one has a "D"...for Desiree. 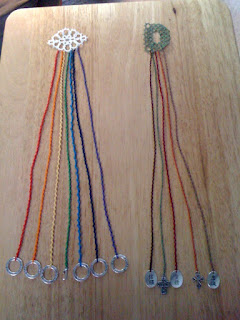 Also, she asked if I could make crochet pumpkins for the children's Sunday school class.
I have been making them since 1980, when Desiree was 4 years old and took them to her class during the fall season. You put them on 'blow pops', or any type of candy on a stick. Well, good thing I had some put away, because she wanted 36! So, I guess I best start now for years to come! lol 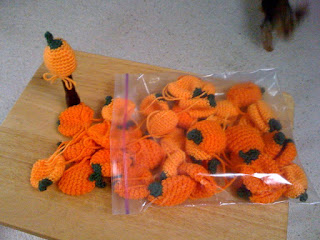 I would be happy to share the pattern if anyone of you would like to make them. Perhaps it's too late for this year, but maybe next!
Posted by Nancy G at 11:27 AM

Blanket looks awesome! I'm not sure I knew it would be brown, I like it! I guess I'm trend setter...everything I want is never around until the next season...curious.I heart pumpkins. Sophie is getting big.

And I can't wait for the book mark, I've been keenly aware of how useful it will be as of late! Desiree'

Hey! The blanket looks wonderful! Sophie is HUGE! I miss the pumpkins :( but not as much as I miss you! Any chance of you coming down next month! Gobble Gobble xoxo

It is nice to have you back. Your puppy is nice and she looks well behaved. The bookmarks and pumpkins are pretty.

Oh, those pumpkins are cute! I finally did a post after a long time, too! :D

Wellll, what did you say your name was? Hmm, welcome back, I must say, it's about time! Your baby blanket looks great. Sophie is sitting there so pretty. I guess she's used to the camera, I'm surprised she's not smiling for you too. I love those bookmarks, they are beautiful. The little silver thingees on the ends are so sweet. I'm going to have to get me some of those. My grandkids would love the pumpkins, can you email the pattern? I will not be at tatting Tuesday, I have a quilt meeting. I'm glad your blogging again, I missed reading you! Hugs, Linda

Girl on a mission said...

Hi, I would love the pattern for the pumpkins. I've never thought of putting something like that on pops, only the tissue ghosts. Thanks. Mary

Thank you ladies, for your wonderful comments! I have missed being here...and its nice to hear from you all!

*clears throat* it is never a bad time for pumpkins... and it is surely never never too late! I would love to make your pumpkins